Songkran festival, the festival of ‘water-throwing' is themost celebrated of all Thai festivals. Celebrated all over the country The festival is celebrated every year on April the 13 th in Phuket and takes only one day and is a big moment of joy and amusement.

Songkran originally a Sanskrit word remembers us anyway that it is in the first place a religious celebration because the meaning is start of a new solar year. It's now called simply New Year. The day before the festival is also called ‘the public Springtime cleansing day'. 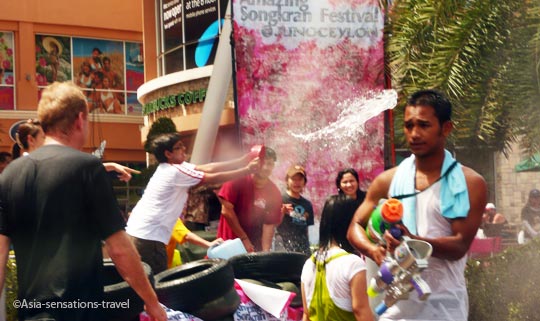 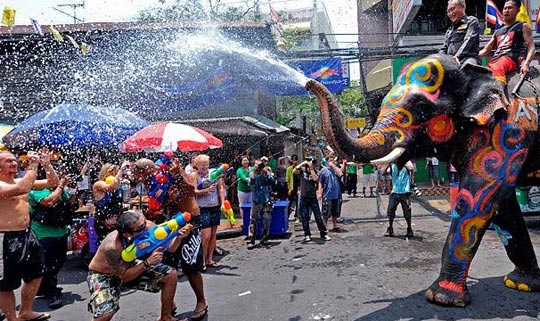 The house wives get rid of all old domestic items they don't use anymore and they burn it, This way the landlord is saved against the ‘bad eye' And than the festival can starts. Water throwing and beauty contests add to the joy along the streets. This way people call for good fortune and abounded water during the coming rainy season.

To symbolize the preservation of nature and to show goodwill, birds and fish are released. This is the proper tradition of Songkran. This traditions are always honored beside the comic situation of the wed tourists. Some Thais wed the tourists completely and they even add talc or flour to the water. That day nobody escapes this wed affair and in the mean time it's a fine way to combat the heat of the hottest month of the year.

Programmed during the month of December, it's one of the most international sports festivals and the most popular on Phuket island. Since 1989 the Triathlon (swimming 1 kilometer, 5 kilometers bicycle and 12 kilometers walking) attires athletes of international level from all over the world and qualifies the winners for the prestigious Triathlon in Hawaii . 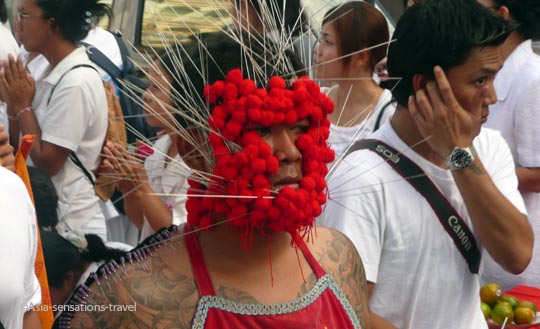 The Vegetarian Festival is the most important of the island and is beside the other national Thai festivals celebrated by the Chinese-Thai people of Phuket. This festival takes place during the 9 first days of the 9 th lunar month of the Chinese calender, so in general end of September or beginning October.

It's an yearly festival since the first time in 1825 in the district if Kathu on Phuket island. By the legend there was about 150 years ago an epidemic illness and by this a group of Chinese ambulant theater actors called in thegods (9 empereurs) and by staying sober and penitentious, the population as by miracle was saved from the terrible decease. Staying sober is since tradition during the festival like it was already for thousands of years in China . 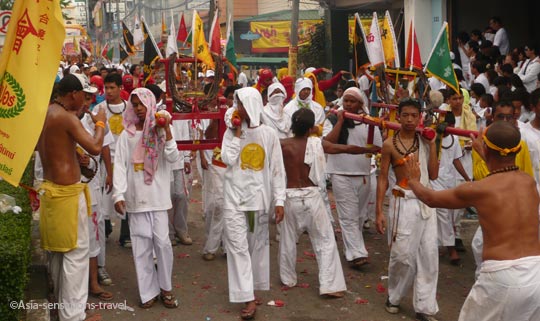 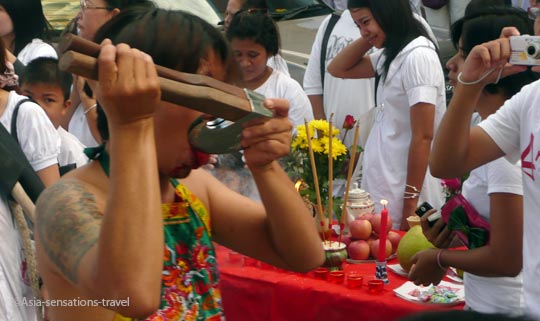 The Chinese think that one get great merit by inviting on earth the 9 gods during the Vegetarian Festival to honor them and to receive in exchange their benediction and remedies. The festival ends by the return of the gods to heaven by a fantastic ceremony. The ceremonies of the festival take place in the vicinity of the six Chinese temples scattered throughout Phuket.

The main temple is Jui Tui Shrine not far from the Fresh Market in Phuket Town. The first event is the raising of the Lantern Pole, an act thatnotifies the nine Chinese gods that the festival is about to begin. The pole is at least ten metres tall and once erected, celebrants believe that the Hindu god, Shiva, descends bringing spiritual power to the event. 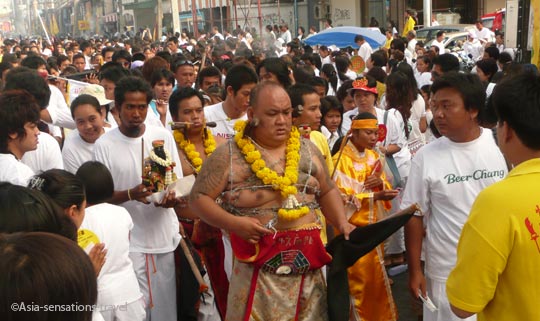 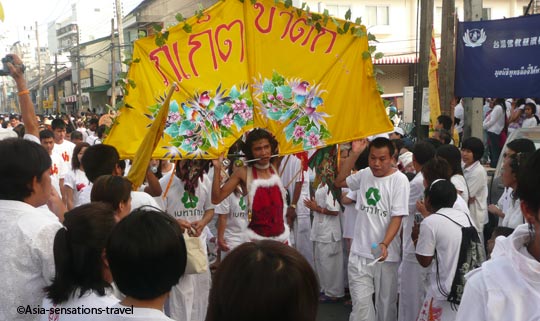 For the next few days, the local Chinese/Thai community brings their household gods to the temple, along with offerings of food and drink. It is assumed that the household gods will benefit from an annual injection of spiritual energy that fills the temple. Visitors can observe and even participate in the lighting of joss sticks and candles that are placed around the various gods. Usually street processions take place, where visitors can see participants walking in a trance. Other events include hundreds of local residents running across a bed of burning coals, or climbing an eight metre ladder of sharp blades while in trance.

Apart from the visual spectacle of this festival, visitors can partake in specially prepared vegetarian cuisine made available at street stalls and markets around the island during this time. The vegetarian dishes are not easily distinguished from regular dishes - soybean and protein substitute products are used to replace meat in standard Thai fare and look and taste uncannily like meat. Look for the yellow flags with red Chinese or Thai characters to find vegetarian food stalls - and keep your camera handy!! 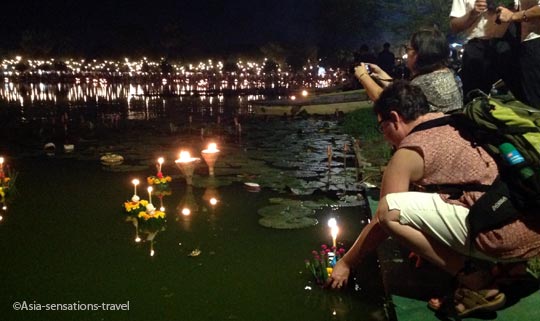 Full Moon Day or Wan Loy Kratong is held on full moon night each November, Thai people prepare small round boats or kratong made from the trunk of a banana tree and decorated with flowers, candles and incense. These are set to float upon the water - rivers, canals, ponds, and the sea - and prayers are uttered so that the krathong will float away, taking all bad spirits and sins along with it. Loy Krathong is one of the most picturesque festivals in Thailand.